One of the most commonly misunderstood punctuation marks is the “em dash.” It’s what a professional typesetter would use instead of a hyphen, or even two hyphens, between two words. These are two examples of what I see most often used instead of a proper em dash:

Or I even see this:

What you should really see is this:

Use a Character Map Equivalent

If you’re using a PC, you can insert an em dash by typing four numbers while holding down the Alt key:

If you’re using a Mac, you can insert an em dash by typing:

If you’re using Microsoft Word to type your text, Word will automatically insert an em dash whenever you type two hyphens between two words with no spaces. Easy! That only works, though, when you’re initially typing something. If you try to insert two hyphens between words, the hyphens won’t be converted.

In that instance, you can simply insert an em dash by inserting a special character in Word. In version Word 365, go to the Insert menu, and select “Advanced Symbol…”:

Then click on the tab “Special Characters,” and you’ll see: 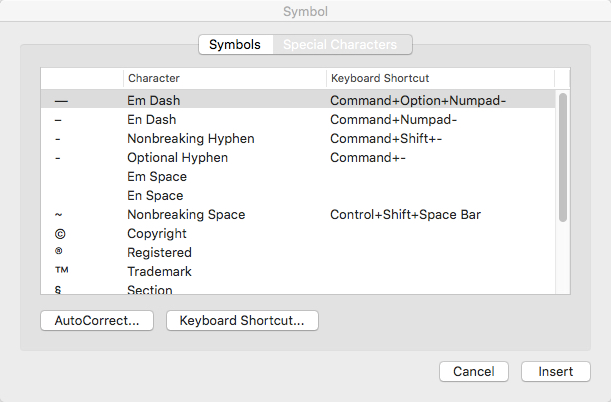 Press the Insert button, followed by the Close button. Your em dash will be inserted.