Microsoft Word will automatically convert some fractions “1/4” to “¼” for you. This is true for the most common fractions, like:

Word does this by using its “Autocorrect” feature. When the font you’re using has the fractions already formatted, Word will substitute the fraction by using the built-in characters from your font.

But what if you want to type 3/16 and have it look like the other fractions? You can “fool” Word into doing this by using a combination of superscript for the number to the left of the diagonal line (/) and a smaller point size to the right of the line.

This is a simple two-step process, after typing your fraction. First highlight the numbers to the left of the diagonal line, and select superscript in the top ribbon or character dialog box: 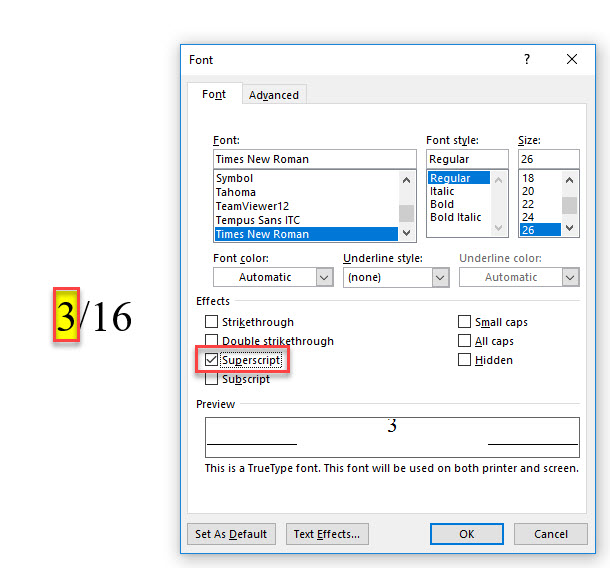 Next, highlight the numbers after the diagonal line. Then change the point size until it looks like the same size as the first number:

I find that the point size is roughly four “clicks” on the smaller point size symbol in the ribbon bar:

And voila! You have a newly formatted fraction!

The first fraction is automatically formatted by Word, and the second is the one that was formatted using superscript and point size changes.

There are two acceptable ways of typing whole number with fractions: